Professors and students of the Far Eastern Federal university (FEFU) have started calculations and development of recommendations on the introduction of new technologies and materials at the biggest shipyard in Russia -  Zvezda shipbuilding complex – within the framework of scientific and technical support of the dry dock construction. 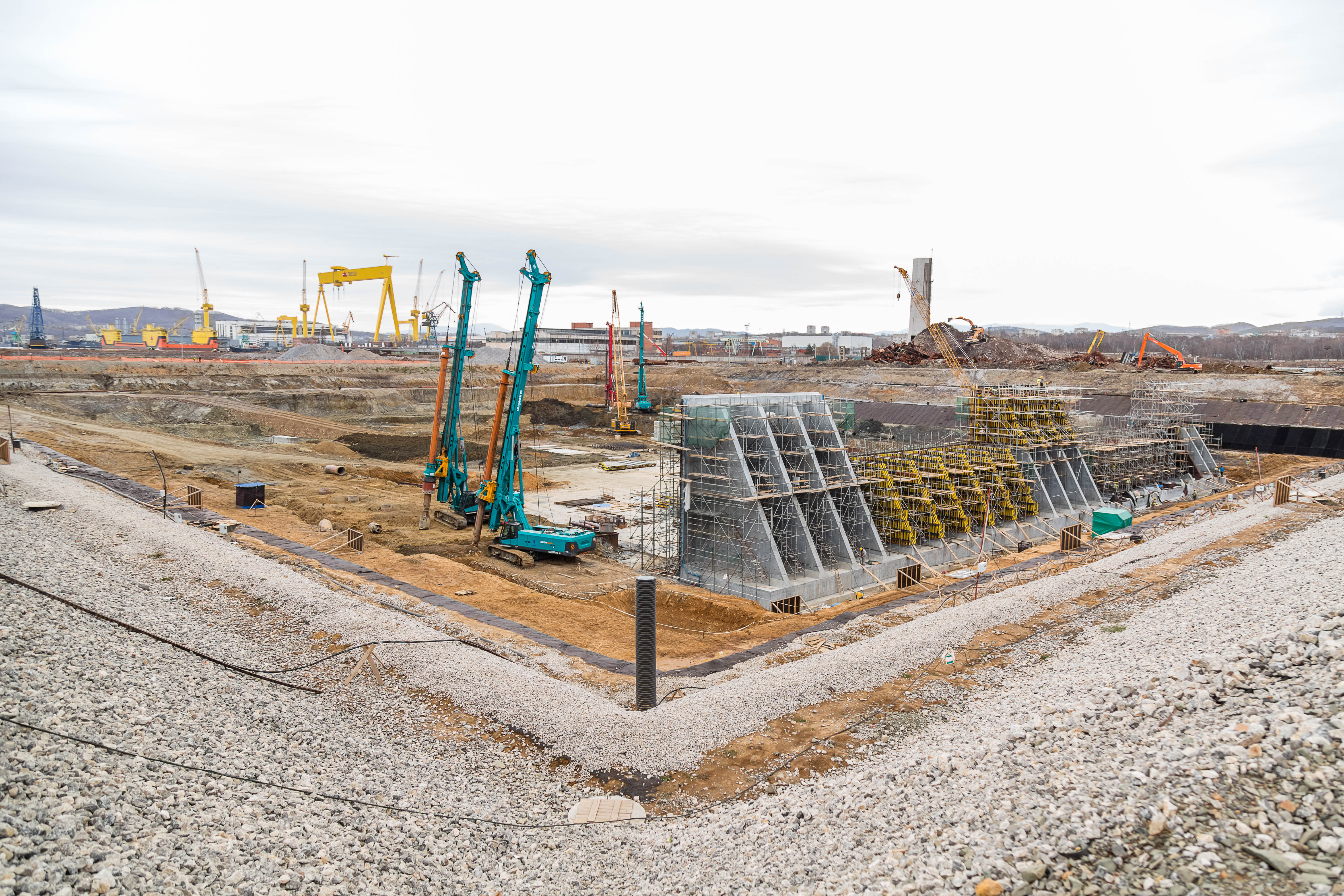 In the dry dock it is planned to build “Leader”, the world’s biggest ice-breaker intended to be the only vessel of this class, capable of carrying out the broadest year-round escort of vessels along the Northern sea route necessary for the development of projects in the Arctic. Dock parameters will also allow to build ice class drilling vessels and other offshore facilities.

"Dock is a construction site for the future ice breaker. The facility will be 100 m width and 400 m length, it will be located below sea level. Therefore, dock will be influenced by different forces, including ground waters , rocky ground upon which it rests, the weight of the vessel under construction,- said Egor Pomnikov, assistant professor of the Hydraulic Engineering Department of FEFU, PhD in Technical Sciences. – Dock is influenced by rise and fall of the tides, sometimes it is flooded by sea water, tries to tilt, aggressive oils and gases are used inside of it during operation. In brief, this structure operating in difficult conditions is considered to be a unique one. Unique structures shall be provided with scientific and technical support both at the design and construction stages”.

Having  performed calculations and checked them on the dock model during design stage, FEFU engineers shall solve practical issues: explore earth foundation, test   reinforcement steel on a special tension testing machine, select concrete composition for the durability of the structural elements. According to Alexander Becker, director of FEFU school of Engineering, specialists of the university have already prepared recommendations for ensuring reliability of the special construction protecting pit of the dry dock and performed complex bottom calculations.

Dry dock pit which is bigger than the dock itself has already been formed, construction of the walls of the future dock was started in September. There was equipped the field laboratory of the University on the construction site for quality control of concrete production and technology of its styling.

"We work in cooperation with dock designers. Concrete composition is constantly adjusted for example due to the weather conditions, - noted Egor Pomnikov. – Specialists from laboratories of new materials, modelling of complex engineering systems and facilities, ice trials of Research and Educational Centre “Arctic” are engaged in these activities. Students, post-graduate students and young scientists of FEFU responded with great pleasure to the call to participate in this project. We have studied, together with our graduate students, one of the dock structures recently.  We were very pleased to participate in the project and see such a unique  construction site”.

As a rule, all man built structures undergo vertical loads. Hydraulic structures are unique due to the influence of horizontal loads. There is a school of hydraulic engineering in FEFU specializing on offshore hydrotechnics since 1970s. Its specialists, for example, participated in the design of facilities in the framework of Sakhalin projects on gas extraction and provided scientific support of the activities. Therefore, they know everything about the influence of different forces on hydraulic structures.

FEFU engineers will provide scientific support of the dock construction before putting it into operation which is scheduled for 2020.

Exploration and development of the World ocean in the Arctic and Far East areas of Russia is one of the priorities of the Far Eastern Federal university.  “Arctic” center was established within the framework of Program on improving FEFU competitiveness. Scientists carry out scientific research work upon the industrial order and full range of engineering services for industrial partners from Russia and APAC countries.

Far Eastern Federal university together with Far Eastern Centre of Shipbuilding and Ship Repair Center and Shipbuilding Complex “Zvezda” conduct targeted training of personnel, research, organize students internship. Now about 200 students, who will work at the shipbuilding enterprises of the region, learn in Engineering school FEFU.